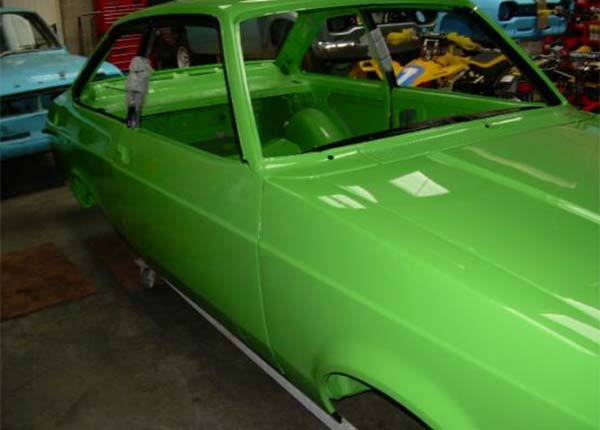 This car was originally UK registered and exported to Southern Ireland. The new owner used the car for a short time before deciding to have it restored. After visiting several restorers, a company was selected and they commenced work. The car was stripped, panels removed along with loads of filler and then the company realised the magnitude of the project and backed out, returning the car to its owner. A couple of years passed and several more restorers were approached. It was not just to find someone who would do the job, as there are several to chose from, it was the standard of repair that was most important. After visiting some of our previous customers we were selected to carry out the full restoration. So the car crossed the water again. This car is currently undergoing total restoration. The body- shell has been totally stripped of all sealants, sand-blasted, re-panelled and finished in Ford Signal green throughout. The shell preparation and paint work is to a very high standard. All mechanical parts have been stripped, powdercoated gloss black and rebuilt to Ford OE standard. The only modifications is the fitment of pol- bushes and uprated shock absorbers. The 2000 cc engine has been professionally rebuilt with a Piper road cam, stage 2 head, lightened and balanced, Ashley 4 branch manifold and twin box exhaust system. The interior benefits from re-trimmed Beta cloth, RS roll-top seats with all new upholstery, door and window seals, carpets and all soft trims. It has 6 “, polished RS alloy wheels (all dated 02/77 ), new bumpers, badges and bright-work. This car is stunning!! as near to standard as you can get.