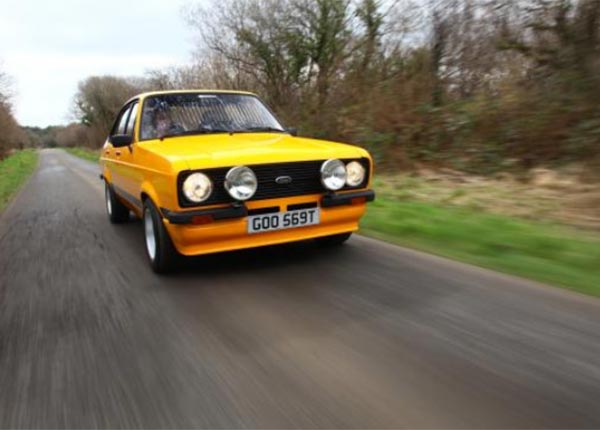 Where do I begin?! My son wanted an Escort and knowing only a 4 door was affordable (and he had to buy the car) he scoured the free ads and web sites and then found this car! The ad read…fully restored professionally but only 90% completed due to a move overseas.. fair enough..It read, brakes fully restored, new callipers that just need bleeding, The engine has run but then removed and although in place now needed to be connected up. 2.8i Capri struts, new rear shocks, 5 speed gearbox, Minilites with 2 good tyres and 2 worn, New window rubbers and headlining, all the seats were there and just needed fitting. It was described as having a professional re-spray etc etc. It had cost over £4500 so far, but he would accept half the amount as a quick sale was needed. We made contact and a deal was done. So off we went to collect the car some 5 hours away with a very excited new Escort owner waiting at home for the arrival of his new car !! When we arrived home the car it was offloaded and put into a holding unit until the weekend when we were going to carry out the 10% work needed to return the car to the road In the cool light of day we inspected the car. The professional restoration work was actually Billy bodgit welding small bits of tin over structural repairs. The wings were badly fitted, non existent wing rails, sills that fitted against the bottoms of the doors, terrible wheel-arch repairs. The strut tops were covered with 0.8mm tin over rot with filler to make it all look good, then stonechiped to cover the repairs. Thankfully we removed all this very easily as it had been sprayed over oil, grease and dirt so removal wasn’t difficult. The shell re-spray was good shell although it had been flatted and polished so much the primer was showing through the top coat. The boot, bonnet and 4 doors were a different shade as they had more paint on !! Nothing would ever work as the wiring loom was badly fitted with numerous faults. The new brakes callipers had been fitted upside down so couldn’t be bled. The Capri suspension legs turned out to be standard 1300 with rusty vented discs and as the lowered springs were too low the strut platforms were cut off and re-welded higher up the casing (cheaper than new springs). The new headlining was not fitted, but when found, it was actually a second-hand unit folded up in an old box!! The gear lever hole was hacked open and a piece of caravan alloy sheet screwed over it. Behind the Ghia wood dash we found holes for gauges forced through metal panel, Everything on the car had been bodged (unfortunately Haynes manuals are available to those with no knowledge and internet forums are full of experts who know nothing about everything and make up what they don’t know. The car was a heap of junk and a very disappointed son was very depressed about it. The 10% work turned out to be a full strip to a bare shell and then a full blown restoration carried out to a budget but still to a high standard. There were no compromises made to safety or quality. Once the shell was stripped the wings, the top mount repairs, chassis patches, sills and arches were removed. When all the work was completed properly the car was given a fresh coat of Signal amber, 2 pack paint. All of the loose panels were painted the same colour and fitted so that the shell was now solid. The mechanical side of the car has had a full make-over with anti tramp bars, Panhard rod, a 4.1 Tran-X plated lsd, RS rear brakes, 5 speed close-ratio box fitted on proper gearbox mountings, 2.8i Bilsteins fitted with new vented big discs, Princess 4 pot callipers. an RS anti-roll bar with brackets, a quick-rack etc etc. The “good” 1600 engine has been swapped for a very good 1300 unit just for insurance reasons. It is actually a 1300 bored to 1400cc, lightened balanced, steel rods, accrilte pistons, Kent cam, vernier pulley set, big valve head and twin box exhaust system. A very nice engine. Black bumpers were found, quarter bumpers for the front, a round grill and headlamps, some spots, a front spoiler, a boot spoiler and finished off with a set of 7 inch proper Minilites with 185 tyres. Now the car is professionally restored!! it’s great having a stores in my father’s workshop. I just hope he does not miss any of the parts I found !!!! Read the feature in CLASSIC FORD MAGAZINE, August 2011