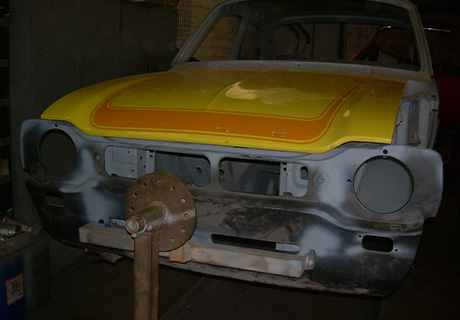 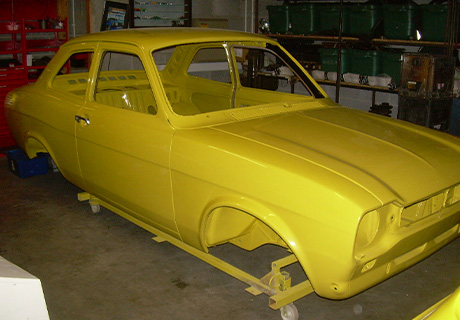 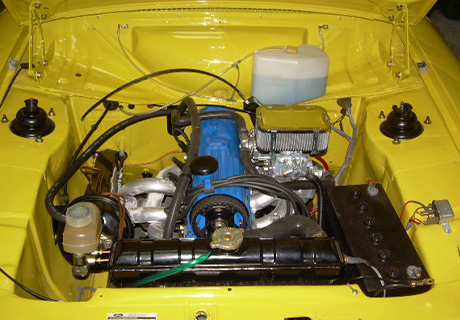 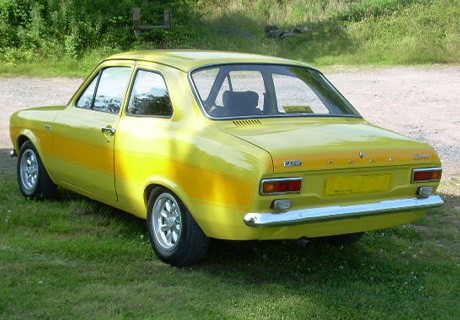 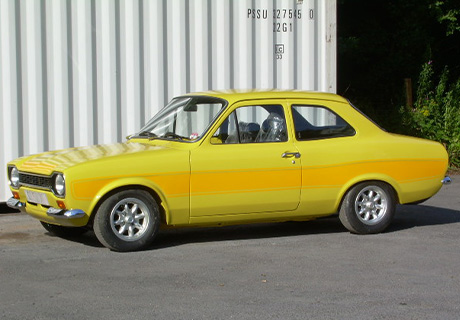 This is an original British car exported to Southern Ireland by its new owner. After a few years of searching for a suitable restorer the owner eventually found us and commisioned us to carry out the restoration. The car arrived as a body shell complete only with bonnet boot and doors. The car had been stripped of all its mechanical parts first then the careful task of removing all trim and electrical parts continued with bagging and labelling all parts along with photos. The cars body-shell with boot bonnet and doors was then transported to us to start the restoration. We started by removing all rusty panels and previous repairs done by Mr Bodgit. We then removed all under-seal and sealants and of course the fibreglass floor pan. The shell was then sand-blasted and primed with a zinc rich primer. As with all restorations we start at the rear first and work forward removing of the badly fitted rear panel, repairing it and then putting it back. The wheel arches and rear lower corners were removed, new ones welded in and the shell primed. We have now completed all work up to the front bulkhead, except for the A pillars. The roof panel has been removed so that it can be replaced with another without the Webasto sun panel. We have now sourced all the front end panels and roof skin, These need to be fitted before the completed shell goes for painting in its original Daytona yellow. We have now collected the painted shell from the body-shop and our first job was to remove the shell from the transport frame and put onto our high axle stands. We then masked and painted the grill area, upper rear parcel shelf and rear seat up-stand. Then all of the captive nuts and bolts were thread-chased to remove all filler dust, paint and stone-chip. Next we warmed up a gallon of clear Waxoyl and impregnated all cavities, doors and the chassis. We have stripped the wiring loom and rebuilt it, replacing all broken and damaged wires. The loom was re-fitted, some roof sound-deadening added, followed by a new black headlining. The shell was then left for a few days for the adhesive to cure before fitting all the glass and a new laminated windscreen. New rubbers, seals and chrome trims, door locks and catches were then fitted. The shell was then loaded onto a trolley for transportation to the owners home in Southern Ireland where he will rebuild the car at his leisure over the next few years. We would like to wish him and his family all the best and look forward to seeing the finished car soon!